Oh how I love the crazy Mandela Effect! Now that I’m apparently ‘aware’ I can see its residue everywhere. I’ve heard that the iconic 80s Pop-Rocker Phil Collins has been embroiled in another example of this high-weirdness with his song 'In the Air Tonight'.

After catching a re-run of the old TopOfThePops 1985 series on BBC Four, I discover yet another link to the time travel meme that’s astonishing.

In the video below you can clearly see (and hear) that Phil Collins was touring in 1985 as ‘Phil Collins and the Hot Tub Club’. Something I’d never ever heard of before. I don’t remember this at all, and I’m supposed to be a Collins fan.

Is this what is known as the Mandela Effect? I could swear under oath that Phil Collins was always just ‘Phil Collins’. I simply don’t remember the Hot Tubs. Anyone? The only Tubs I remember is Tubs from Miami Vice. Which, ironically, featured Phil Collins "In the Air Tonight" song in its very first opening pilot episode scene!

What immediately came to mind though, was the 2010 movie ‘Hot Tub Time Machine’. It’s a weird link between time-travel and the 1980s, now seen through the medium of the Mandela Effect. 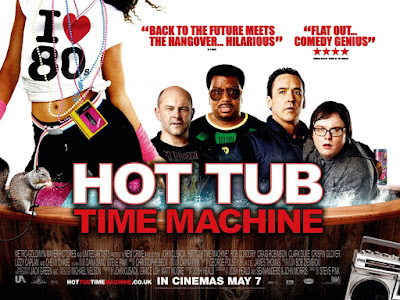 The above video is a brief explanation of the original Phil Collins reported Mandela Effect. Does this make any sense?

It's possible that people are just mis-hearing, mis-reading, and mis-remembering things. On the other hand, maybe something truly weird is going on right in front of our eyes. It could be an experiment at Cern went wrong, as some believe.

Perhaps a scientist has discovered time travel and is actively working to 'change the future' a la Terminator style. Alternatively, the collective-unconscious has been hypnotized into an altered state. Time itself could be imploding? Who knows? It's all un-provable theory.

Catching re-runs of the old TopOfThePops 1985 series on BBC Four has brought back a lot of memories from my youth. I never imaged it would cause me to question the state of reality!
Posted by ... at 10:18 AM 2 comments: