There's a strange sync with 'Gibraltar' at the moment. There have been dozens of earthquakes in the Straits of Gibraltar these past couple of weeks. How sad to see these dead and dying creatures of the sea lose their way and somehow come to rest at Gibraltar Point, near Skegness in the UK.

As it turns out, these are not the only ones in the area to have lost their bearings.

From the 'Lincolnshire Free Press/Spalding Guardian' newspaper we read...

Residents along the east coast of Britain are praying they will not see a repeat of the tragedies seen in Skegness and Hunstanton where six whales have now washed up on the beach.

Hundreds of people from all over the East Midlands flocked to Skegness to see three dead whales on Central Beach before they were removed to Sheffield for rendering last Wednesday. A fourth whale that beached of former Ministry of Defence (MOD) land in Wainfleet remains there and a fifth was removed from Hunstanton a week ago.

Today, as staff from the Hunstanton Sealife Centre worked to ease the suffering of another whale beached there at about 7.30am, residents were asking why whales keep straying into the North Sea - and will we again see a repeat of the distressing scenes of last week?

The whale that beached in Hunstanton this morning brings the total in Germany, the Netherlands, France and the UK to 29. 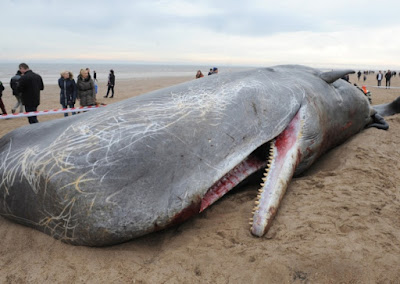 Rob Deaville, of the Zoological Society of London, was one of the officers who performed the autopsy of a whale in Skegness.

Mr Deaville was in touch with Hunstanton when the Skegness Standard spoke to him. He said “We are currently helping to manage the whale’s passing.

“It may be that it gets washed out alive in the high tide but the signs are not good."

“We are appealing to the public to stay away so the whale does not become any more distressed.
“Should the whale die we will again visit Hunstanton to try to understand why this keeps happening."

“There have now been 29 whales wash up and die in the North Sea and we are in contact with our colleagues in Germany, the Netherlands and France to try and find the answer. 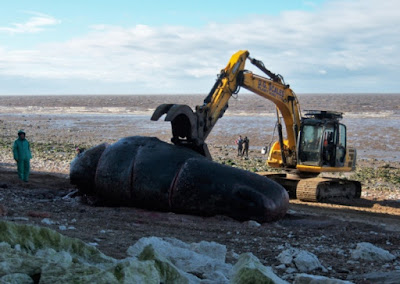 “It is however still far too early to say whether the whales are part of one bachelor pod or separate pods are coming into the North Sea.”

On a different note today...

A small asteroid that two years ago flew past Earth at a comfortable distance of about 1.3 million miles (2 million kilometers) will safely fly by our planet again in a few weeks, though this time it may be much closer.

During the upcoming March 5 flyby, asteroid 2013 TX68 could fly past Earth as far out as 9 million miles (14 million kilometers) or as close as 11,000 miles (17,000 kilometers). The variation in possible closest approach distances is due to the wide range of possible trajectories for this object, since it was tracked for only a short time after discovery.

Scientists at NASA's Center for NEO Studies (CNEOS) at the Jet Propulsion Laboratory in Pasadena, California, have determined there is no possibility that this object could impact Earth during the flyby next month. But they have identified an extremely remote chance that this small asteroid could impact on Sep. 28, 2017, with odds of no more than 1-in-250-million. Flybys in 2046 and 2097 have an even lower probability of impact.

"The possibilities of collision on any of the three future flyby dates are far too small to be of any real concern," said Paul Chodas, manager of CNEOS. "I fully expect any future observations to reduce the probability even more."

Asteroid 2013 TX68 is estimated to be about 100 feet (30 meters) in diameter. By comparison, the asteroid that broke up in the atmosphere over Chelyabinsk, Russia, three years ago was approximately 65 feet (20 meters) wide. If an asteroid the size of 2013 TX68 were to enter Earth's atmosphere, it would likely produce an air burst with about twice the energy of the Chelyabinsk event.

The asteroid was discovered by the NASA-funded Catalina Sky Survey on Oct. 6, 2013, as it approached Earth on the nighttime side. After three days of tracking, the asteroid passed into the daytime sky and could no longer be observed. Because it was not tracked for very long, scientists cannot predict its precise orbit around the sun, but they do know that it cannot impact Earth during its flyby next month.

"This asteroid's orbit is quite uncertain, and it will be hard to predict where to look for it," said Chodas. "There is a chance that the asteroid will be picked up by our asteroid search telescopes when it safely flies past us next month, providing us with data to more precisely define its orbit around the sun."