The Lion and the Unicorn... London Bridge is Falling 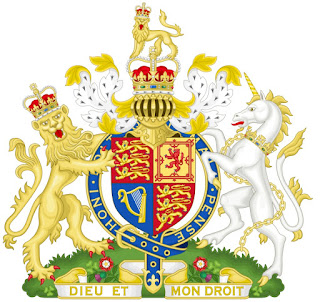 Since very late last night I have found myself censored from Twitter, unable to post anything with the London Bridge Shooting or London Bridge Attack hashtag… it appears someone reported me. I’ve hit a nerve with my questions.

By now I’m sure you’ve seen all the videos, or most of them, and have heard the official narrative about this latest ‘London Terror’ incident ironically putting the ‘Black’ into Black Friday.

There is a lot of info out there if you can be bothered to read through it. This latest story of bloody Mid-east terror intrigue to put the fear back into the population (for good reason, turning them away from their Brexit meltdown, or Royal controversy) has more twists than any best seller.

I’ll break it down into small chunks for those of my Tweeters that hate, so chew on this…

Cambridge University were holding an ‘event’ in Central London, at the Fishmongers Hall, north of London Bridge. It was a ‘Prisoner Rehab Program’ called something like ‘Learning Together’, where ex-cons and convicted terrorists attended together.

The first victim of the terror attack was Rehab Course Coordinator Jack Merritt (25) who was knifed somewhere in a downstairs room of the Hall, where other attendees then dragged the assailant, Usman Khan, out into the street. It’s not clear who or how the other (female) victim was killed. Nor is there, as yet, any information on the other victims who are apparently seriously ill in a London hospital somewhere.

A convicted murderer (unnamed) was one of several people attending the conference who tussled with the assailant Kahn towards London Bridge and tried to stop him from going on a ‘rampage’ apparently. He is the man seen in videos ‘sitting’ on Khan moments before the Police open fire. Another man (unnamed) used a fire extinguisher to force Khan to the ground.

Another man, Polish chef (unnamed) had grabbed a ‘Narwhal Tusk’ from the wall of the Hall and use it as a weapon against Khan. He is seen in the videos holding something that looks like a long white pole and poking it at the assailant. 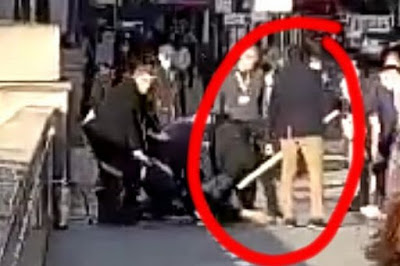 By the time this incident was in full swing, Police had cordoned off a large section of the city area, traffic onto the bridge had ground to a halt, Police had stopped a white lorry from trying to leave by doing a U-turn, and eye-witnesses on several London buses, and on foot, were filming/live streaming the incident only meters away, before armed Police moved them back. 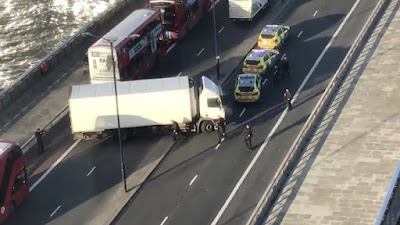 The London Bridge location makes perfect headlines for the papers and is easy for an international audience to understand. Better than, say Westminster, or Tower for example. On viewing the videos posted during and after the incident, things begin to take on an even more surreal tone. Questions inevitably crop up.

The Assailant
Some of this if from The Guardian Online… “Usman Khan, 28, knifed five people before he was tackled and disarmed by brave witnesses and then shot dead by police at point-blank range. 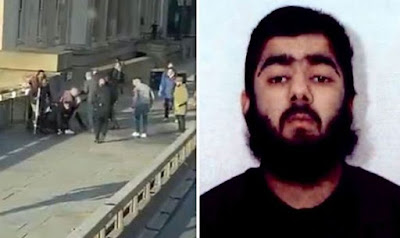 He was armed with two kitchen knives and wearing a fake suicide vest when he launched his attack while attending the Learning Together event. Police said he acted alone.

Khan was a convicted terrorist released half-way through a 16-year prison sentence for a plot to bomb the London Stock Exchange.

He was automatically released on licence in December 2018 after serving less than seven years and wearing an electronic monitoring tag when he went on the stabbing spree.

In February 2012, Khan, formerly of Stoke, was given an open-ended indeterminate sentence for public protection over his part in an al-Qaida-inspired plot to bomb the London Stock Exchange and build a terrorist training camp on land in Pakistan-controlled Kashmir owned by his family.

A list of other potential targets included the names and addresses of the Dean of St Paul's Cathedral in London, then London mayor Boris Johnson, two rabbis, and the American Embassy in London.

But the sentence for Khan, along with two co-conspirators, was quashed at the Court of Appeal in April 2013 and he was given a determinate 16-year jail term and freed on licence in December last year and made to wear the tag.

The Parole Board said it had no involvement in his release and that Khan "appears to have been released automatically on licence (as required by law), without ever being referred to the board".

Khan, of Stafford, struggled as he was pinned to the ground until armed officers arrived and shot him in front of dozens of witnesses as traffic came to a grinding halt on the bridge over the River Thames.”
The Undercover Cop, the Knives and the White Packet

So, things now become weirder as you view more and more material on the incident you will find some high-strangeness. Several plain-clothed Police officers just happened to be in the area and joined in to bring the assailant down. In one video, an officer is seen picking up a white package from the ground next to Khan and putting it into his left pocket. Moments later he grabs the knife from Kahn and moves away along the bridge shouting something to his colleagues and then to bystanders to move away. As he does so he removes the white packet from his pocket and throws it to the ground.

Police are clearly seen with their guns drawn (possibly SIG516s) pointed right at Khan only meters away. At this point Khan is on the ground kicking his legs up in the air, he’s being held down on the ground by the (unnamed ex-con murderer). One officer holds a Taser over Khan. However, this doesn’t appear to have been deployed, as the Police pull the ex-con murder from on top of Khan, and bystanders move back. One armed officer then shoots Khan in the back of the head as he attempts to get up. 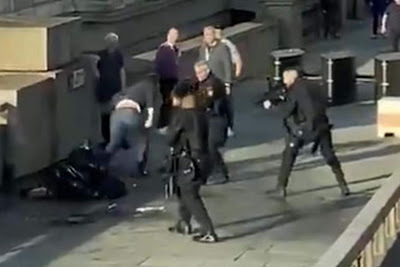 Interestingly, late last night a Twitter poster re-posts a video found on Instagram which shows another angle. The time is unclear, but Khan is supposedly lying dead on the ground with no one (no one visible in the shot) around him. Khan then appears to actually get up. The video causes confusion but corroborates eye-witness statements that ‘several’ gunshots were heard and not just one or two. Khan was presumed dead but was then re-shot to make sure – the video shows that this was NOT at point-blank range. This is the Instagram video reposted but now removed from Twitter and Instagram. All messages and posts surrounding this video have been deleted by the users. My Twitter timeline no longer shows the video, the comments around it and the name of the original Instagram poster have simply vanished.

While in the midst of full-on Tweeting comments and re-tweets were disabled around this. A couple of other tweeters were actively trying to save the posts and video but were unable to, watching them disappear in front of their eyes. Social Media censorship in full swing.

I attempted to comment on someone’s thread that I didn’t believe this was a false flag operation but rather something else that has been obscured by clever media manipulation. However, I was immediately blocked from using any of the related hashtags. My attempts to save the comments and video were to no avail.

Then Sky News joins the furore by Tweeting a clip of their documentary where they admitted that they were actually filing in real-time when the terror attack began:

“This is the moment members of the elite Police Territorial Support Group responded to the London Bridge attack. Our Home Affairs Correspondent @skymarkwhite was filming with them when they got the call.”


As this is doing the rounds, other commentators state that there just happened to be a BBC reporter on the scene too, while others posting on the ‘London Bridge Attack’ thread with screenshots showing that the incident was reported online before it took place!
This latest event ranks as one of the strangest yet. Some heavy high strangeness and synchronicity at work. The Narwhal tusk thrown into the mix, once thought to be proof of Unicorns back in the day, makes this a sort of fantasy fiction story, especially when you see that the Unicorn symbol, so beloved of kids these days, forms part of the emblem for the United Kingdom and on crests everywhere, including the London Police. The Lion and the Unicorn symbols full of esoteric meaning. The Police and the Public fighting a terror threat in full view of the world on a bridge in the middle of the most famous city in the world. You couldn’t write this stuff, but there it is on your TV news at two o'clock in the afternoon. Do you believe everything you see on TV these days?