The Christmas Tree of Life and Knowledge - Good and Evil 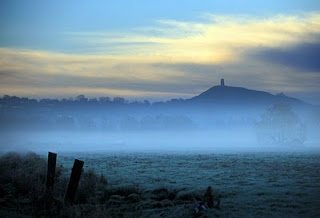 The Holy Thorn tree on Wearyall Hill in... Glastonbury, Somerset, is regarded as one of Britain’s most important symbols of Christianity, stretching back for centuries.

According to legend, Saint Joseph of Arimathea travelled to England, landing at the Isle of Avalon, after Christ was crucified, bringing with him the Holy Grail of Arthurian folklore.

He is said to have stuck his wooden staff – which had belonged to Jesus – into the ground on Wearyall Hill before he went to sleep. When he awoke it had sprouted into a thorn tree, which became a natural shrine for Christians across Europe, the Glastonbury Holy Thorn. The tree is renowned for flowering twice a year at Christmas and at Easter.

Because of its associations with Joseph, (he was the Virgin Mary’s uncle), the Holy Thorn is of important spiritual significance for Christians and has come to be regarded as sacred by many others.

The original Holy Thorn was a centre of pilgrimage in the Middle Ages but was chopped down during the English Civil War. A replacement thorn was planted in 1951 on Wearyall Hill, but it had to be replanted the following year. Other examples of the thorn grow in the grounds of Glastonbury Abbey and St Johns Church.

Each year a sprig from another one of the Holy Thorn trees in the town is cut for the Queen, a tradition which dates back more than 100 years. The Queen places the sprig on her dining room table on Christmas Day.

On the morning of 9th December 2010, Glastonbury locals found the sacred tree hacked down to a stump by ‘persons unknown’. A sacrilegious act of violence that has left many Christians shocked and distraught.

The owner of Wearyall Hill is Edward James, 70, who was arrested this week in connection with the collapse of Crown Currency Exchange, of which he is a major shareholder. The company, which has 8,000 creditors, collapsed in October, owing £16 million.

One possibility is that the attack may have been part of a vendetta against Mr. James, who is on police bail. There is no proof; this is just one of the many theories. Another is that anti-Christian groups could be behind the vandalism, an act of defiance during the Christmas season.

Whatever the reason, we can be sure of one thing, whenever a sacred place of pilgrimage is desecrated in this way, terrible tragedy soon follows. I will cite the Buddas of Bamyan in Afghanistan as a prime example of this.

In the encyclopedia of mythology we can read about how trees of all kinds held great spiritual significance. In legends from around the world, trees appear as ladders between worlds, as sources of life and wisdom, and as the physical forms of supernatural beings…

With its roots buried deep in the earth, its trunk above ground and its branches stretching toward the sky, a tree serves as a symbolic, living link between this world and those of supernatural beings. In many myths, a tree is a vital part of the structure of the universe. Gods and their messengers travel from world to world by climbing up or down the tree.

Providers of shade and bearers of fruit, trees have long been associated with life and fertility. Evergreen trees, which remain green all year, became symbols of undying life. Deciduous trees, which lose their leaves in the winter and produce new ones in the spring, symbolized renewal, rebirth after death, or immortality.

Many creation myths draw on trees as symbols of life. In some versions of the Persian creation story a huge tree grew from the rotting corpse of the first human. The trunk separated into a man and a woman, Mashya and Mashyane, and the fruit of the tree became the various races of humankind. Norse mythology says that the first man and woman were an ash and an elm tree given life by the gods.

The tree of life, with sacred animals feeding on fruit-bearing branches, is a common image in the art of the ancient Near East. The tree was associated with palaces and kingship because the king was seen as the link between the earthly and divine realms. Through him, the gods blessed the earth with fertility.

Traditional Persian and Slavic myths both told of a tree of life that bore the seeds of all the world's plants. This tree, which looked like an ordinary tree, was guarded by an invisible dragon that the Persians called Simarghu and the Slavs called Simorg.

For fear of cutting down the tree of life by accident, Slavic peoples performed sacred ceremonies before taking down a tree. The Persians cut no trees but waited for them to fall naturally. In the mythology of the Yoruba people of West Africa, a palm tree planted by the god Obatala was the first piece of vegetation on earth.

Trees and the fruit they bore came to be associated with wisdom, knowledge, or hidden secrets. This meaning may have come from the symbolic connection between trees and worlds above and below human experience. The tree is a symbol of wisdom in stories about the life of Buddha, who was said to have gained spiritual enlightenment while sitting under a bodhi tree.

A traditional Micronesian myth from the Gilbert Islands in the Pacific Ocean is similar to the biblical account of the fall from Eden. In the beginning of the world was a garden where two trees grew, guarded by an original being called Na Kaa.

Men lived under one tree and gathered its fruit, while women lived apart from the men under the other tree. One day when Na Kaa was away on a trip, the men and women mingled together under one of the trees. Upon his return, Na Kaa told them that they had chosen the Tree of Death, not the Tree of Life, and from that time all people would be mortal.

In 723, a Christian missionary named Winfrid (Bishop Boniface) cut down an oak tree sacred to the god Thor. This action is said to mark the beginning of the Christianization of the Germanic peoples. He stripped to the waist, took an axe, and chopped the tree down. As the god Thor did not strike Winfrid dead with a lightning bolt, the German soldiers fell to their knees in reverence and were baptized into the Christian faith.

When I was much younger I visited Glastonbury many times as it was close to my home town. The air is thick with mystery and magic. The area holds a special place in my heart, so I guess this is the reason for today's post. The cutting down of the Holy Thorn tree is clearly a very un-holy thing to do. I hope it does not herald some kind of un-enlightened new age.

Merry Christmas to all!