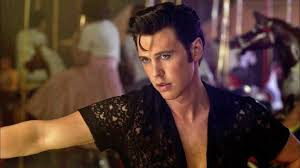 I went into this movie expecting the usual formulaic biopic, with an extra rhinestone thrown in, seeing as the main attraction is the King of Rock n’ Roll Elvis Presley and its director/writer extraordinaire, one Baz Luhrmann (Moulin Rouge, The Great Gatsby). I came out with a song in my heart and tears in my eyes, as co-writers Sam Bromell, and Craig Pearce, dished out an extravaganza rarely comprehended on the silver screen by previous films tackling the rise and fall of beloved music icons.

Presley, embodied here by Austin Butler, who you may remember from Once Upon a Time in Hollywood (2019) has resurrected Elvis for a new era. There are plenty of good actors in this movie, impersonating well known characters in Elvis’ life, but Butler is a standout. He first appears channelling a sort of John Travolta (his Danny Zuko period) then swiftly transforms before our eyes into The King of Rock n’ Roll, like a contemporary rock star taking to the Pyramid Stage at Glastonbury.

This latest story, told to us by the weary eyed Tom Hanks as Colonel Tom Parker, Elvis’ infamous manager, is narrating an apology for our misconceptions. He fancies himself as the Greatest Showman, a sort of PT Barnum of the 1950s. Like all entertainment managers who raise to the top but fall harder, he dreams of a mega Vegas opening night to take him away from the usual circus acts and family shows that he promotes. Hanks is always good playing real people if you can push prosthetics aside.

There are a couple of moments which drop the spectacle, where you could even call ‘Elvis’ a satirical political thriller, though only just. There’s a comic-book style which moves us at a dizzying pace through Elvis’ life, capturing the Zeitgeist, from segregation to Vietnam. Not everything we’ve heard about Elvis is in here, just the headlines, but your questions about the music that moulded him are answered. It’s also an interesting show and tell about the business, and the way artists are used by their managers to make a fast buck. It’s also a story about prejudice and culture, about our double standards, in a world where ‘change is gonna come’ whether you like it or not.

Fans of Elvis should find this movie appealing, although anyone with an ounce of appreciation for rock n’ roll, will be tapping their feet and singing under their breath. There are clipped scenes of orgasmic rapturous number one tunes that have been hiding in our collective unconscious, lyrics we thought we didn’t know, until they’re dragged out of us on karaoke night.

It’s a rollicking ride, brash and ballsy, full of the hype that Hollywood promises, and a sharp blow to the senses. With all the subtlety of a bulldozer crushing rides at a fairground Elvis delivers. Never again will you look at him in quite the same way. As I said at the beginning, I went into this movie expecting the usual formulaic biopic, I came out of the cinema knowing Elvis Lives!

It’s good to read a positive review, as some of the American reviews I’ve read they poo-pooed the movie as being too fast for their poor minds to take in.
I like all of Baz’s movies, except ‘Australia’, so I’m looking forward to seeing ‘Elvis’ (as it was filmed down the road from me here in Australia) when I shake off this Covid.
Cheers/Daz

Thanks Daz Yes, definitely see it I’m sure you will enjoy the ride. Wishing you to get well soon!

Great review. It was certainly a visual treat that you had to see on the big screen. This properly the untold story of Elvis on many ways because people didn't know the backstory or the controlling nature of Elvis. But apparently Patricia Presley met with Hanks and Saud that Parker wasn't as depicted through some people's eyes but he was a kind and gentle human being. I remember the Kurt Russell John Carpenter version which was ok what I remembered of it.